Study one of the world’s most beautiful and influential languages with a B.A. in French from UND.

Studying French leads to a deeper understanding of history, culture, art, theater, fashion and much more. A degree in French from UND is a gateway to a world of opportunities.

Why Study French at UND?

More than 400 million people around the globe speak French, making it one of the most widely spoken and influential languages in the world. French is an essential language for anyone who wants to converse fluently in the international arenas of business, diplomacy, science, art and culture.

As a French major or minor at UND, you'll immerse yourself in French language and culture and examine literature, film and other media from the 50-plus French-speaking countries of the world. You'll choose upper-division courses from the following categories:

Our students have paired a major in French with engineering, medicine, education, aviation, criminal justice, music, history and many other fields.

French is also offered as a minor or certificate.

Immerse yourself in student life on campus and share your passion for leadership.

French alumni have gone on to a variety of successful careers with: 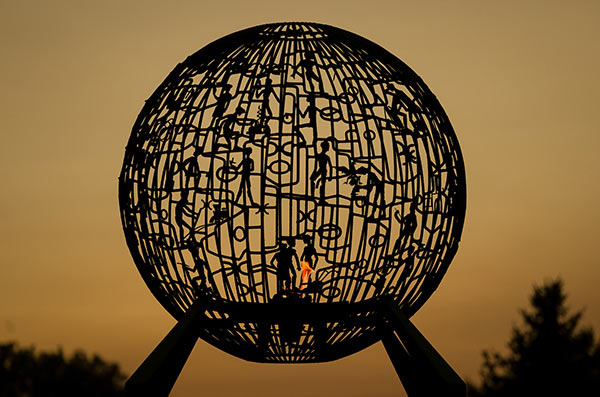 A degree in French opens the door to a wealth of career opportunities in the United States and abroad. Researchers predict that French-speaking communities will grow rapidly in the coming decades, expanding opportunities to work in international business, tourism, diplomacy and much more.

UND's proximity to French-speaking Canada means your French degree will increase your marketability in the local job market.

Our alumni have gone on to graduate study and/or careers in law, education, medicine, international business, human rights and more. With a degree in French from UND, you'll be prepared for any career path you choose.

Courses You Could Take

The study of concepts helpful in describing contemporary cultures and their applications to addressing contemporary issues from both domestic and global perspectives in the francophone world. Prerequisite: FREN 202 with a grade of a C or better, French placement exam or consent of instructor. F.

Oral and written practice with terminology and idioms used in commerce and business correspondence. Readings on such topics as banking, employment, markets, production, services, trade and practices in the French business world. Prerequisite: FREN 301 with a grade of a C or better, French placement exam or consent of instructor. On demand.

An oral and written approach to French grammar and stylistics. Prerequisite: FREN 302 or equivalent. On demand.

Topics for this course may include genre studies, survey of literary and or social/political movements, or a specific time period. Depending on the topic and the range of interest outside the major, the course may be taught in French or English. For major or minor credit, written work must be done in French. Repeatable up to 6 credits when course content differs. Prerequisite: FREN 202 with a grade of a C or better, French placement exam or consent of instructor. Repeatable to 6 credits. On demand.

Looking to add a double major, or connect with the department?