The Oxford House was built as a home for UND presidents. It is said to have been the first home in the city wired for electricity at the time of construction. Its construction was aided with money loaned from President Webster Merrifield and his new wife, Elizabeth Bull, widow of the Cream of Wheat  Company founder.

Architect Joseph Bell DeRemer designed the Colonial Revival mansion as a showplace, featuring a ballroom,
three fireplaces, stained glass and all the modern conveniences of a time: speaking tubes, a dumbwaiter,
and the “most sanitary construction.”

It remains the oldest standing building on campus.

The UND Art Department moved in for a seven-year stay.

The house was saved from scheduled demolition and listed in the National Register of Historic Places, which qualified it for matching federal funds. It was then restored, with help from major gifts from the Myra Foundation, the Campbell family foundation, and the estate of W. Kenneth Hyslop.

The building restoration was designed by JLG Architects of Grand Forks. They began work in October 2018 and completed it in June 2021.

Thanks to generous benefactors Hal and Kathy Gershman, and after many months of design discussions among the Provost's Office, Graduate School, Architects, Facilities, UND Foundation, Donors and current graduate students, the renovation began. It included upgrades and reinforcement of the foundation, mechanical and electric systems, elevator, pillars, roof, windows, flooring and landscape. Accessibility to the balconies was improved, and period-specific lighting, drapery, wall-covering, and other furnishings were carefully chosen and installed throughout the building. 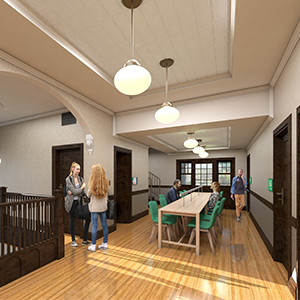 Thanks to a $3 million gift from Hal and Kathy Gershman, the historic Stone House building will be renovated for graduate students.

UND graduate students may access the student lounge after hours via U-Card. The building (including after hours access) is closed on holidays.

Guests may park in the pay lot located north of the Gershman Graduate Center on University Ave.