"As early as the 1920's, there was talk of building a student union for UND students as a memorial to the University's World War I dead. Plans, however, were put aside as a result of the economic hard times during the Depression years," (John Leppo, Memorial Union, 2009). In 1946, students and alumni worked together to raise funds and petition the State Board of Higher Education to approve an assessment of $5 per semester to help fund the building. The addition of the word "Memorial" reflected students' sentiments to dedicate the building as a living monument to the memory of those UND students and alumni who died during World War II.

On May 18, 1951, the Memorial Union was dedicated and held its first event, the junior and senior prom. Through the decades, the Memorial Union has remained a constant in campus life, providing students and campus community members a place to gather, engage in programs and events, and access a wide range of amenities and services.

Two name changes, two building additions, renovations and several minor space improvements later, the vision for and a plan to proceed with a complete rebuild was driven by student leaders and supported by the UND student body, just as it's initial creation had.  The journey from ideas and concepts, through planning and design, to construction has spanned more than four years with student leaders engaged through each phase to see this dream realized.

If you are interested in taking a deeper look into the history, read the Memorial Union from 1951 to 2007.

Gerald “Jerry” Pokrzywinski was the longest tenured tenant of the Memorial Union. Jerry was the head barber at the campus barbershop, where he served for over 53 years.

In 2015 as part of a campus-wide process, the Memorial Union was inspected by the ISES Corporation, a company specializing in facility management consulting and condition assessment.  With their analysis complete in October of 2015, ISES categorized the Memorial Union in "Below Average Condition", the category that recognized major renovation was needed.  The study focused on non-recurring, yearly recurring, and deferred maintenance repairs and system replacement costs to bring the building back up to acceptable condition.  Shortly after the study was completed, a formal Memorial Union Master Planning Process began.

The Memorial Union Master Planning Study 1, in coordination with WTW Architects specializing in student union projects and based out of Pittsburgh, PA, explored the feasibility of renovating and expanding the existing Memorial Union. This study developed a comprehensive report to guide decision making and the setting of priorities to address identified space and facility infrastructure needs.  Prioritized amenities desired by students and the campus community were explored and established.  Financial strategies and initial cost projections were also studied. The planning process included four phases; (1) Discovery/Visioning, (2) Exploration of Options, (3) Refinement, and (4) Synthesis/ Final Report.  Gathering information for each of these phases was an interactive process that utilized a campus-wide survey of students, user group interviews with live polling, open forums, peer union facility tours, and committee meetings with UND constituents. 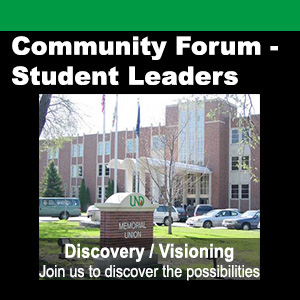 The first community forum conducted by WTW Architects for student leaders was held on March 8th, 2016, in the Lecture Bowl in the Union.  This visit from WTW was a fact-finding expedition to discover what student leadership's top priorities were in a new facility, and to begin to create the vision of a new Memorial Union.

On April 30, 2016, an online student survey was launched with the goal of discovering what students enjoyed most about the current Memorial Union and what amenities and services they would most like to see if a building project were completed.  Upon completion of the survey process 1,334 students participated in the survey offering valuable feedback to contribute to the ongoing master planning process.

This report defines a new vision for the transformation of campus life at the University of North Dakota.Paul KnellWTW Architects
July 27, 2017

After the conclusion of the Master Plan Study 1, planning discussions continued and project option cost projections were further evaluated to determine student fee increase feasibility and impact.  UND student leaders called for the development of a modified Memorial Union project scope of work that could be realized with a reduced student fee increase threshold.  Over the course of the next year, a refined master plan was completed by WTW Architects in collaboration with other project consultants, student leaders and campus community stakeholders.  From this process, Student Government Executive Leadership proceeded with a student fee referendum to consider a Memorial Union project.

On November 20, 2018, UND students were provided the opportunity to participate in an online student referendum to make their voice heard regarding a student fee increase. Just over 53% of the 2,439 students who voted in the referendum voted ”yes” to support a student fee increase for a new Memorial Union.  As with the establishment of the original Memorial Union and its additions through past student initiatives, the next chapter was set in motion by students.

Students voted to leave a legacy. This will benefit the next generation of students.Erik HansonUND Student Body President
2018-2019

The successful student fee referendum led to the initiation of project implementation next steps.  As additional levels of official project approval were secured, pre-project building condition mitigation steps proceeded.  To accommodate initial preparations relocation plans were developed for MU building occupants.  Communication and information sharing has been at the forefront of the MU planning process.  It was also a priority for UND to create a centralized communication strategy and method where students, staff, faculty, alumni, and the greater UND community were informed about UND campus construction and enhancement projects.  As a result, the Campus Renewal & Construction Updates Blog was created to post timely and informative updates.

With many campus services, programs and departments moving to and from different buildings, the Blog Relocations page informed the campus community of all transitions.  Memorial Union front-facing service transitions started on Friday, February 15, 2019 and ended on Friday, May 17, 2019, when the original Memorial Union closed its physical doors in preparation for the next chapter.

From Demolition to Construction: July 2019 - Present

On Thursday, July 11, 2019, members of the North Dakota State Board of Higher Education (SBHE) unanimously gave UND the greenlight to begin razing the Memorial Union.  This date marked a milestone for this priority project as a part of the University's campus master plan.  The SBHE discussed the Memorial Union during a special meeting, in which UND Interim President Joshua Wynne recommended that the project should proceed.  President Wynne emphasized to the State board that the Memorial Union is about students, their interaction with other students and faculty to improve their educational experience. 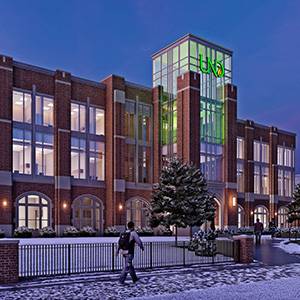 Watch live as construction continues on the Memorial Union.  Two webcams have been installed to capture the day-to-day progress.  A 30 second time lapse from the beginning of demolition to it's current state is also available for viewing.

The sound of excavators, bulldozers, and backhoes could be heard across campus on Wednesday, July 31, 2019, the first day of demolition.  Students, staff, faculty, alumni, and other UND campus community members watched nearby or via the live construction camera.  The demolition process lasted through August.

Once the demolition dust settled, a new era for the Memorial Union at UND could begin. On Friday, October 4, 2019, current and former student leaders, representatives of UND executive leadership, additional project stakeholders, and UND community members gathered near the construction site for the Memorial Union groundbreaking ceremony.  This celebration was the culmination of several years of planning, research, campus community dialogue, and stakeholder collaboration.  The blueprint for the future had been made, and now it was time to lay the foundation.

...together we are building an even better future for this great University.DeAnna Carlson ZinkAlumni Association & Foundation CEO
October 4, 2019

On Thursday, April 29, 2020, UND held a beam raising ceremony. Beam raising ceremonies historically are a construction tradition to celebrate the placement of the final structural beam to "top off" the building's structure. A custom beam including the phrase "For ALL UND Students...Past, Present, & Future" painted in UND green and also including student signatures from a February 2020 beam signing event was raised and placed in the North Tower.

Over 100 request forms were submitted on day one of the open space request process.

The Memorial Union will open fall 2021. The MU will continue its tradition of serving as the heart of the UND campus, ushering in an enhanced UND student engagement experience.