Our goal is to drive the world-changing developments of autonomous systems.

A national leader in unmanned aircraft systems (UAS) education and research that has pioneered its use in agriculture and energy as well as policy and law enforcement, UND could continue that lead when it comes to cyber security and data analytics, said Mark Askelson, champion of the autonomous system Grand Challenge.

The UND Research Institute for Autonomous Systems (RIAS) has yielded major funding from the FAA for detect and avoid technology, and industry partnerships with companies such as Xcel Energy have yielded benefits for both industry and UND.

Askelson’s goal is to maintain UND and North Dakota’s leadership status by offering a rapid response team for use by the military, FAA, industry and government that could quickly offer applied research and technology. The team would use big data to, for example, model oil reservoir pools and increase cyber security.

“This could offer a big return to the state,” Askelson said.

We want to innovate in a way that increases opportunity in the region, and we’re on the right track.Mark AskelsonGrand Challenge Champion

UND is a proven leader in UAS with the expertise to help drive the industry's growth. 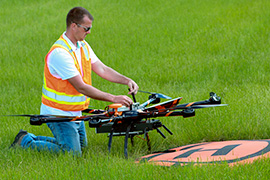 RIAS was created to take the state to the next level to become a global leader in UAS research application and policy development. 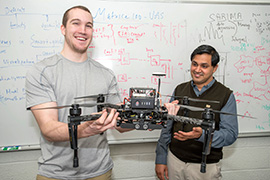 Integration of UAS into National Airspace

We have major FAA funding for research in detect and avoid requirements for beyond visual line of site operations. 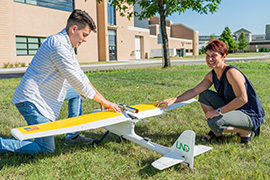 We're working closely with Test Site and Harris Corporation on HubNet – the first UAS network in the nation to provide a full range of aviation-grade services for UAS operations. 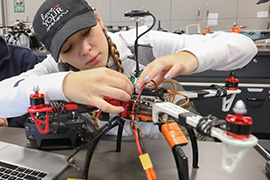 UND is playing a major role in “perching” and wireless power recharging research.